“The Web is Agreement.” Jeremy Keith’s eloquent statement neatly summarizes the balance that makes it possible for us to build amazing things. Each week, new devices appear with varying screen sizes, pixel densities, input types, and more. As developers and designers, we agree to use standards to mark up, style, and program what we create. Browser makers in turn agree to support those standards and set defaults appropriately, so we can hold up our end of the deal.

This agreement has never been more important.

That’s why it always hurts when a device or browser maker does something that goes against our agreement. Especially when they’re a very visible and trusted friend of the web—like Apple.

You see, Apple’s newest tablet, the iPad Mini, creates a vexing situation: Its device-width viewport tag defaults to the same values as Apple’s original iPad (768×1024 pixels), even though the Mini’s screen is physically 40 percent smaller. That means every button, graphic, link, and line of text on a web page on the iPad Mini appears tiny—even when we try to do the right thing and build flexible, multi-device experiences. 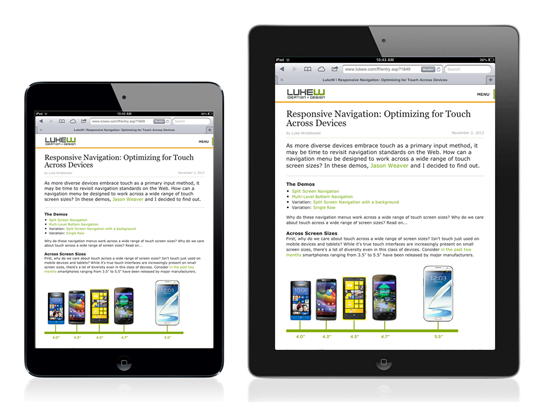 Two iPads, one too small.

But Cupertino isn’t the only culprit out there. This is a problem that’s been brewing since we started using the viewport—and it has to do with not just pixels, but our own practices as well. Let’s take a step back and understand what’s really causing today’s woes—and what all of us need to do about it.

Today’s viewport woes can be traced right back to pixels—yes, those tiny elements we work with every day.

The first pixel challenge is quantity. The more pixels in the display, the more information can be displayed. But as these are physical pixels whose number can’t be altered after the fact, a second factor comes into play: the screen’s physical size.

Imagine two two-inch-wide displays (about the width of the iPhone), as shown below. 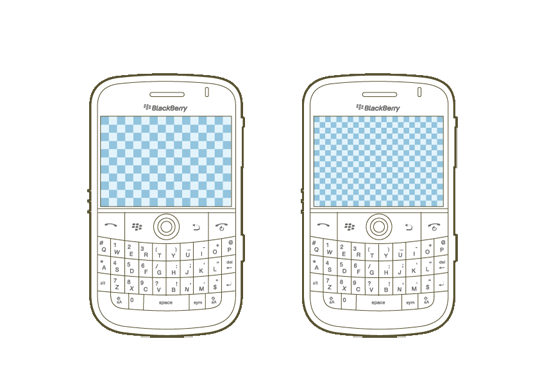 The first is 320×480 pixels, the second 640×960. This gives the second display four times as many pixels as the first, but fits all of them into the same physical space. This smaller pixel size results in content that is also smaller—making it crisper, but much harder to read as well.

This is exactly what happened on the Nokia E60. In 2005, most mobile phone displays were about an inch and quarter wide, with an average of 176 pixels in that width. But the E60, which sported a “huge” 352×416-pixel display, crammed twice the number of pixels into a similar amount of space. The result: A gorgeous, crisp—but often hard-to-read—display.

The E60 also introduced a now-familiar problem: how users would manage to surf “big” sites on a tiny device. Nokia’s solution was a new browser, the Mini Map. This browser behaved similarly to today’s smartphone browsers by first rendering the full-sized page, then scaling it to fit the available screen size. Superimposed onto this rendering was a transparent red box that could be repositioned using the device’s joystick. Clicking the joystick would zoom the content indicated within the box.

Mini Map was probably one of the first commercial uses of a dynamic viewport—a construct designed to dynamically change the size or scale of the visible screen area in order to improve the user experience. But it was far from the last.

In 2007, Apple released the iPhone, a much larger device than the E60, but one with a similar problem. Even on a “huge” two-inch display, surfing the “real web” on an iPhone meant loading large pages onto a small device. Apple chose to solve this problem through a series of carefully orchestrated enhancements.

The first was the creation of a virtual viewport similar to the one Nokia designed for Mini Map. When encountering desktop websites, the browser would render them at their full size (based on a default canvas width of 960 pixels). It would then scale them down to fit the two-inch display. Users could interact with the page to scroll and zoom in on areas of their choice.

Apple didn’t stop there. It also developed a new viewport meta tag. Sites not using the tag would be rendered using the default, legacy-web viewport of 980 pixels. But developers who opted to use the tag could declare the viewport for their sites, including setting the width to the all-important device-width value. This value tells the browser, “please pick a width that fits this specific device’s screen best.”

Other mobile browser vendors were quick to follow Apple’s lead. Nowadays just about every mobile browser supports the viewport meta tag, including the device-width value. This provides us with an even playing field: It respects the efforts of those who take the time to adapt sites for the multi-device web, while those who haven’t yet made this transition still receive a “good-enough” default experience.

The value device and browser vendors assign to device-width is directly related to that device’s physical dimensions. Physically smaller devices need a smaller device-width value (which will result in larger content). Set a value that’s too large, and most content will be too small to comfortably read.

And that’s why Apple’s iPad Mini has a vexing viewport. It uses the same 768-pixel device-width as the regular iPad, even though its physical size is much smaller. One would expect to see a device-width more in line with those of similarly sized tablets like the BlackBerry PlayBook or second-generation Samsung Galaxy 7″—around 500 to 600 pixels, as shown in this chart.

Because of this device-width, web pages appear 27 percent smaller on the iPad Mini than they do on the Google Nexus 7 (calculated based on the relative size of device pixels)—all because Apple decided to describe the device’s viewport as 768 pixels.

One of the first places this causes problems is in text: More pixels in a smaller space means that fonts sized in pixels will look correspondingly dinky.

Of course, many of us aren’t sizing in pixels anymore—we’re using relative dimensional elements like ems, right? Only, that doesn’t quite solve the problem this time.

When we use ems, we imply a certain trust that the browser’s baseline font size at the default zoom level—1em or 100 percent in unit parlance—is sane and readable. But that’s not always the case. The browser’s baseline font-size value (1em) roughly equates to a 16-pixel square. This ratio serves as a ligament that binds absolute and relative units, but it can vary from browser to browser.

On the iPad Mini, font-size at baseline is precisely 16 pixels. That may have worked fine when fewer pixels were packed into our screens, but on a dense display with an improperly defined viewport, that’s going to be uncomfortably small.

Not all browsers toe the 1:16 em-to-pixel line, though. The Kindle Touch’s browser, for example, has a high-density viewport, but adapts by using a 1:20 ratio, kicking the default font size up a few pixels for readability.

This might not fix all of iPad Mini’s viewport problems, but at least the content would be legible. 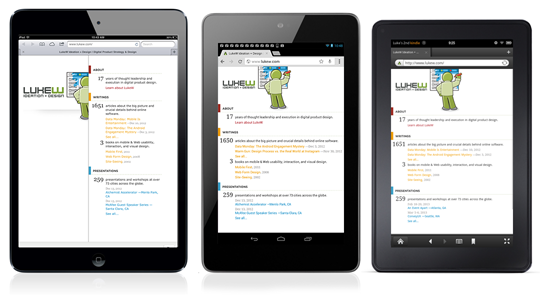 So why did Apple do this?#section6

To understand why Apple would release a product with such a vexing viewport, we don’t have to look further than our own habits.

In the wake of the iPad’s initial release, web folk worldwide scrambled to adapt sites to look good on the new tablets. Somewhere along the way many of us collectively settled upon pixel-based notions of tablet-ness, and those notions often resulted in fixed, 1024×768-pixel layouts precisely targeted at these devices.

Were Apple to decrease the device-width value for the iPad Mini on account of its smaller physical size, it would guarantee a second scramble as existing tablet-adapted sites assuming a 1024×768 viewport suddenly looked unexpectedly wretched on the new device.

The responsibility here goes two ways. Browser makers need to provide reliable baselines of viewport and text sizing, yes. But we as implementers also need to stop grasping for pixel-perfect control over our layouts (the “control” is an illusion, anyway).

The only way for us to move forward is together. As developers and designers, we need to hold up our end of the bargain and be mindful of how we do our work—and that means letting go of the notion of pixel precision once and for all. We need to earn the trust of browser makers so they hear us out when things just frankly aren’t right. We hope this article illustrates we’re trying to do the right thing. We hope browser makers acknowledge that and follow suit.

Standards and consistency are more important now than ever before. Please let browser makers and device manufacturers, like Apple, know that we rely on consistent and reliable decisions about default viewports and their zooming. We’re willing to hold up our end of the agreement, and we need them with us.

Let’s move into the future—together.

The Best Browser is the One You Have with You

The web as we know and build it has primarily been accessed from the desktop. That is about to change. The ITU predicts that in the next 18–24 months, mobile devices will overtake PCs as the most popular way to access the web. If these predictions come true, very soon the web—and its users—will be mostly mobile. Even designers who embrace this change can find it confusing. One problem is that we still consider the mobile web a separate thing. Stephanie Rieger of futurefriend.ly and the W3C presents principles to understand and design for a new normal, in which users are channel agnostic, devices are plentiful, standards are fleeting, mobile use doesn’t necessarily mean “hide the desktop version,” and every byte counts.

How We Hold Our Gadgets

Touch adds a new dimension to our designs, and asks us to think not only about the canvas of the screen, but also about how users interact physically with the screen itself. We need to consider the ergonomic needs of holding a smartphone, tablet, or hybrid device—switching hands, swapping grips, and pointing, clicking, and typing. In this excerpt from Chapter 1 of Designing for Touch, Josh Clark examines the role of thumbs in driving our device interactions, no matter the size of the screen.

How Do We Get It Done, Now?

In the future that’s forever one short year away, brilliantly functional, widely implemented APIs will redeem us from our toil and trouble. We just have to get ready for their coming, while seeing to the nitty-gritty of making the web work in the present. Sadly, it's a lot less predictable than that. Every new standard has to start small, and we’ll always need to choose which API to back and which to pass over.
Get our latest articles in your inbox. Sign up for email alerts.

Why do so many content models still look more like design systems rather than reflecting structured data? Mike Wills takes us on a personal journey as he examines his own past experiences and invites us to conceive content models that articulate meaning and group related content together for use on any channel.
In this excerpt from Design for Safety, Eva PenzeyMoog discusses concrete ways you can incorporate safety awareness into your design processes.
In this excerpt from Sustainable Web Design, Tom Greenwood provides clear guidance on how to track and address the carbon footprint of our websites.
In this excerpt from Voice Content and Usability, author Preston So talks about the messy, primordial nature of human speech and challenges with programming computers to deal with these complexities.
As devices continue to diversify in dizzying ways, how can we make sure our work on the web stays as relevant as ever for the long haul? Cathy Dutton shares how practitioners must perfect designs both for the paradigms of the present and the twists of the future, come what may.