We like shadows. We enjoy making them drop and we love CSS and standards, so we wrote CSS Drop Shadows. The little voice in our head approved of it. We thought that was the end of it.

The internet being the kind of medium it is, minutes after the publication of the article, we started receiving comments, queries and suggestions for improvements. Most notable among the latter was Phil Baines’ method for keeping the markup simple when dealing with paragraph drop shadows. We are indebted to him.

The most complained-about shortcoming of the technique turned out to be the sharp top and left edges of the shadow, which, although generally acceptable, are unlike what an image editing program would produce (a fuzzy shadow). Given that the shadow image is effectively clipped at those points, we felt this was an unavoidable inconvenience, chiefly due to Internet Explorer’s inability to display PNG’s transparency natively.

Then Jan pointed out a technique for making Internet Explorer render PNG’s alpha channel correctly. It works by activating Explorer’s AlphaImageLoader filter (previously discussed in this ALA article), but does so in an inobtrusive way which requires no extra javascript code. We think it’s a godsend. Combining this technique, some image trickery and our “fake shadow offset” method, we’ll be able to make properly fuzzy shadows that work across browsers.

In this article we’ll learn how to:

First, we’ll fabricate our fuzzy shadow edge. To do this, we must create an inverse shadow in our image editing program. Usually we’d use a black shadow over a background color. For this effect, we’ll need a colored shadow. It must be the same color as the background over which we’ll apply the effect.

Start with an image like the “fake shadow offset” we described in the previous article. This one should be thinner than before (about 3px thickness for a 6px shadow has worked out well for us). Our examples will use white as background color. When reproducing this technique, adjust for yours.

We’ll apply a “Drop Shadow” effect to this image, taking care to specify white for the shadow color. A strong shadow is desirable — the stronger it is, the faster your shadow will seem to fade. We should now have something that looks like this:

Save this image as a PNG with full transparency. We’ll use this file for IE5.5, IE6 and standards compliant browsers. Make a regular version sans shadow with thicker offset (as seen in the previous article) and save that as a GIF file. We’ll feed this one to IE 5 (which does not support the AlphaImageLoader filter). Here are sample files for your perusal: PNG/GIF (Check them on an image editing program, since they will look like white on white in your browser).

Since we now have a solid color at the edge of our offset, we’ve effectively given up on the possibility of having a transparent shadow, so we’ll use a simple GIF for it. Make sure you apply the effect over the background color you’ll use. Here’s our example shadow: GIF.

The markup for this effect will be two <div>’s around our image/block element.

The basic technique is still the same: We’ll set up the fake offset (with its inverse shadow) as background of the innermost <div>, and the shadow as background of the outermost one. When overlapped, the transparency of the PNG will seem to gradually dissolve the shadow image until it becomes the solid background color. The tricky part is making this work in Explorer.

Our CSS is pretty much what we had seen in the previous article:

If you look closely you’ll notice we’re still including the non-fuzzy GIF offset (shadow2.gif) as background of the inner <div>. This is for the benefit of Internet Explorer 5.0, which doesn’t support the AlphaImageLoader filter. As it stands, this code will apply to all versions of Explorer. To make adjustments for IE 5.5/6, we’ll create an extra CSS file.

To activate the AlphaImageLoader filter in a simple and reliable way, we’ll first include it in its own CSS file and name it ie.css. We know this is shameful and will probably make the Standards Squad put a price on our head, but we’ll hide this file from other browsers later, so it’s ok. Kind of.

The AlphaImageLoader filter supports two sizing methods: crop and scale. We’ll use crop for our offset (scale fits the full image into the block, and is not what we’re looking for). Since the filter is somewhat limited and does not support CSS-like image positioning, we’re stuck with shadows that drop down and to the right (the image on its default position is all the way to the left and top).

We should note that, since the filter places the image in the foreground of the block element rather than as its background, this technique could be set up to show fuzzy shadows in Explorer with only one <div> surrounding the image, and show the hard edge shadow for other browsers. Not being ones to reward bad browser behavior, we’ll stick to the technique with the extra <div>, which gives us a fuzzy shadow in almost every browser under the sun.

To hide the ie.css stylesheet from all browsers that don’t need it, we’ll use Conditional Comments, a Microsoft provided technique to serve content to specific versions of Internet Explorer. They are included in the html document and look like standard html comments, so browsers other than IE5+ ignore them (and so does the w3c Validator, which is convenient). We’ll insert this in the <head> of our document, after the CSS for the drop shadow:

What that does is specify that the enclosed bit of code should be used by versions Greater Than or Equal (the gte part) to Internet Explorer 5.5 (it must be specified as 5.5000 because of Version Vectors), thus feeding IE5.5 and IE6 the special stylesheet.

That completes the technique. This may seem overly complicated just to achieve a fuzzy shadow, but then again, they say that God is in the details. As a plus, the mentioned techniques can be used to achieve all sorts of different effects.

Here, have a cat: 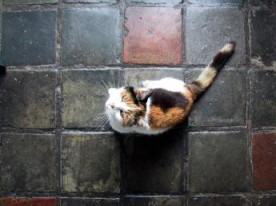 To Jan, who has been playing with this transparency thing for far longer than we have, to Phil Baines, for his suggestions on how to improve the methods exposed in the previous article, and to Ava McBride, for facilitating the use of the Browsercam service for testing of these techniques.

Much used, oft maligned but always popular, drop shadows are a staple of graphic design. Although easy to accomplish with image-editing software, they’re not of much use in the fast-changing world of web design … until now.

Request with Intent: Caching Strategies in the Age of PWAs

Web development is hard. We don’t always get it right on the first try. Fortunately, we don’t have to get everything perfect from the start. Jeremy Wagner provides some helpful ways to start recovering from our collective JavaScript hangover.
Get our latest articles in your inbox. Sign up for email alerts.

In this excerpt from Writing is Designing, Michael J. Metts and Andy Welfle discuss the importance of writing with accessibility in mind.
In this excerpt from Expressive Designs Systems, Yesenia Perez-Cruz goes deep on what it takes to create design systems that enables intentional, meaningful variation.
To boost performance responsibly, Aaron Gustafson puts a spin on classic best practices, experiments with media caching strategies, and shares smart Cache API tricks.
Jeremy Wagner shows us how to get and keep third-party JavaScript under control through clean-up sprints and eternal vigilance.
Learn the three storytelling pillars of vulnerable and transparent content to forge deeper connections with your users.