The electronic book is the latest example of how HTML continues to win out over competing, often nonstandardized, formats. E-books aren’t websites, but E-books are distributed electronically. Now the dominant E-book format is XHTML. Web standards take on a new flavor when rendering literature on the screen, and classic assumptions about typography (or “formatting”) have to be adjusted.

HTML isn’t just for the web#section2

It’s for any text distributed online.

Technology predictions can come back to haunt you, but this one I’m sure about: The fate of non-HTML formats has been sealed by HTML5 and the iPad. People are finally noticing what was staring them in the face all along—HTML is great for expressing words. The web is mostly about expressing words, and HTML works well for it. The same holds true for electronic books.

It may be unseemly to dance on graves, but HTML wins again.

HTML doesn’t work for all documents, since it lacks important structural features. (HTML5 addresses some of those deficiencies but won’t help today’s E-books.) HTML does  work for huge numbers of documents, many of which we call books. Bet against HTML for online distribution and you’ve backed the wrong horse.

Every article on electronic books must ritually address the concept of book and the relation of form to book. In this case I will acknowledge the remarks of internet pioneer Jaron Lanier, who warns in his book You Are Not a Gadget that early software decisions can dramatically constrain what later becomes possible. (Others have stated the same thing—the type designers at LettError complained a decade ago about how software tools constrain ideas.)

I am articulating an HTML-triumphalist view of E-book production. By backing what I feel is obviously the right horse, I am contributing to the strangulation of new or uninvented forms of the book. Advocacy of one digital format is always a process of eugenics; other formats will never be born or will die prematurely. I’m doing that right now by downplaying the importance of XML and DTBook variants of ePub.

I am happy to contribute to the death of “vooks” and other multimedia websites masquerading as books. (I do not want a rectangle of video yammering at me while I’m trying to read.) They’re like animated popunder ads in that no actual “user” wants them, but somebody with an agenda does. Exterminating that species is something to which I am proud to contribute. For other forms of books, advocating strict HTML markup will cause as-yet-unknowable harm.

I nonetheless maintain that typical works of fiction, and many works of nonfiction, can be expressed very well indeed in HTML E-books. To attain this degree of expression, we have to rid ourselves of print conventions that do not work in electronic media.

Another way of saying this is that books should be as bookish as possible under the circumstances. Printed books need to take advantage of everything print has to offer (resolution, tactility, portability, collectibility), while electronic books must do likewise for their own form (economy, copyability, reflow, searching and indexing, interlinking).

Two problems to be solved#section4

If HTML is the dominant markup language for most E-books, then web standards come into play. Frankly, I don’t want to relive the late 1990s and early 2000s, in which standardistas had to come up with one slightly different way after another to convince developers to code their sites properly. You still don’t see valid HTML very often on real-world sites, but tables for layout are largely a thing of the past and semantics are hugely improved. Maybe pure web standards did not “win,” but whatever web standards aren’t definitely lost.

It would be overconfident to assume that this success will immediately replicate itself with E-books. Publishers (there are barely any “developers” in the E-book sphere) will not automatically do the right thing, and so far they seem to be doing exactly the wrong thing.

If we want publishers’ code in E-books to be as good as standardistas’ code on actual websites, we’ve got two problems to solve.

The underlying code for typical ePub electronic books is XHTML 1.1. That means you need valid code with no errors: the ePub standard requires XML error handling, so you can’t get away with HTML 4.0”“style tag soup.

Novels and many nonfiction books are semantically simple. Most can get by with a tiny range of tags:

Even nonexperts can be readily trained to recognize simple structures like these. But people untrained in even the simplest markup are the problem.

For E-books to have good code, good code has to be found at every stage of the production process. That is not how things are done right now. 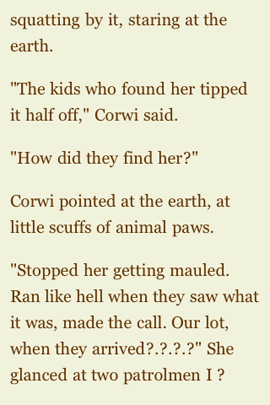 Thin spaces between dots in an ellipsis become question marks. For more examples of typographic tragicomedy in E-books, see this article’s Sidebar.

Hundreds, if not thousands, of commercially available E-books from legacy publishing houses were converted to “electronic format” by scanning printed books and turning the resulting OCR book copy into text files. (Indeed just text files, not structured markup.) Copy errors are so rampant that E-books are the first category of book in human history that could actually be returned as defective. This in turn has led to the equally rampant mythology that E-books are all about “formatting.” (They aren’t: they’re about structured text with styles attached.)

Why would publishers scan hardcopies? Aren’t all books produced on computers these days? Yes, but do publishers own those files, or do various freelance designers? Can anybody even find the files? What if they were saved in an old version of Quark Xpress or Ventura Publisher?  Instead of rooting around in files resident on computers they don’t really understand anyway (these are book people), publishers find it easier to just send print books out to low bidders for scanning.

Now there’s a cottage industry selling conversion services for E-texts. One competitor in the E-book “space,” Kobo (né Shortcovers), promises conversions for “as little as $29… per title.” Another competitor, eBook Architects, converts (“to Mobipocket/Kindle first”) for about $400 in typical cases. The New York Times estimated that to “convert the text to a digital file, typeset it in digital form and copy-edit it” costs a mere 50¢.

Fees this low are unsustainably low and cannot possibly lead to good markup and clean copy.

This isn’t hypothetical. We have countless examples to look at right now (see sidebar).

E-books are barely beginning to catch on and already the most important parts of an E-book — copy and markup—are suffering from a race to the bottom.

What’s the solution? The canonical format of a book should be HTML. Authors should write in HTML, making a manuscript immediately transformable to an E-book. A manuscript could then be imported into that fossil the publishing industry refuses to leave behind, Microsoft Word. (MS Word’s Track Changes feature has become a kind of methadone for an addicted publishing industry.)

To typeset a print book from this source, translating twice (HTML → Word →  InDesign) is a proven workflow with the added advantage of outputting tagged PDFs with good semantics.

Now, the foregoing is so optimistic as to be ridiculous. Authors are not going to start writing in HTML, let alone the full-on XML that Ben Hammersley has called for.  Book copy will continue to be saved as MS Word, Xpress, and/or InDesign files. Though mangled and inadequate, such copy will then be “exported” for E-book “formatting.”

Instead of avoiding errors to begin with, the publishing industry may choose to fix errors after they’re made—but only if authors, especially big-name authors with ruthless literary agents,  complain loudly until publishers have entire imprints’ E-books repaired. This will not result in authors writing good strong HTML for new books, but will clean up part of the mess.

There’s a lot of activity in the electronic-book “space,” from virtual think tanks like the Book Oven to crowdsourced copy-editing at Bite-Size(d) Edits, to name two sites comanaged by impresarios Hugh McGuire and Stephanie Troeth. Two other projects are working on the possibilities of standardized structured code in the E-book process.

Separation of content and structure has never been more important#section9

ePub uses XHTML 1.1 as a markup language. You may also associate stylesheets — explicitly CSS2, not any other version. As such and as ever, markup must be separated from presentation.

But E-book creators come from the publishing business. They’re writers, editors, desktop publishers. They will naturally attempt to hack and deform code and text to reproduce features from print layouts that should really be governed by CSS, handled by the E-book reader, or forgotten about entirely. In some cases, you actually have to alter the text of a book to make it work as an E-book; in other cases you must not do that.

Tasks the reader software must handle#section11

Pure separation of structural markup and presentation will be impossible to achieve in books more often than on websites. Common book-typography features can be adequately expressed in E-books only by the sacrilege of altering the source manuscript.

Over and over again, tables are held up as something E-books pretty much cannot do. I read this as an admission that people doing E-book “conversion” don’t understand table markup. Horrendously complex tables can be marked up in HTML. (What they might really be complaining about is how much width a table takes up — perhaps more than a certain E-reader display natively has.)

Experimenting with the form of the book is one thing, but E-book structure is not something we should make up as we go along. We shouldn’t pretend there aren’t any rules, nor should we import print-book concepts that do not work in onscreen books. The dominant E-book format of the future, ePub, can benefit from our nearly ten years’ experience building standards-compliant websites.

It's time we came to grips with the fact that not every “document” can be a semantic “web page.” Some forms of writing just cannot be expressed in HTML—or they need to be bent and distorted to do so. But for once, XML can help. Joe Clark explains.

The Future of Web Software Is HTML-over-WebSockets

The future of web app development is taking shape, and it's changing the way we think about server-side app architecture. In this article, Matt E. Patterson shows why a new WebSockets-driven approach is catching developers' attention, and how it can mean faster, easier development that results in an experience just as rich as client-side SPAs.

Voice user interfaces, smart software agents, and AI-powered search are changing the way users—and computers—interact with content. Whether or not you’re building services for these emerging technologies, structured content is now necessary to ensure the accuracy and integrity of your content across the evolving digital landscape.
Get our latest articles in your inbox. Sign up for email alerts.

Publish global, think local. Discover how to use your website as a communication tool to gain new markets in different cultures. (Hint: Translating your content may not be enough.)
JavaScript gives us many ways to do things, but deciding which way can be tricky. Laurie Barth gives some insight into how to make these decisions for your team.
Looking to maximize the performance of your site with minimal effort? Check out Jeremy Wagner’s streaming Service Worker.
In this excerpt from Volume 2 of RECOGNIZE, Regine Gilbert offers a helpful mnemonic for approaching our design work from a fresh perspective: “WOQE” for watch, observe, question, and explore.
How to face reality when your team screws up, and get everyone back on track.