Halfway through 2004, I openly predicted incessant redesigning would become somewhat cessant by the same year’s end:

How wrong I was. Apparently the Incessant Redesign is far from extinction.

Like a kid in a candy store, we creatives redesign like it’s the new black. Why do we possess such an insatiable desire to refresh and remake? Why do we thrive on renewal? What tempts us to be seduced by the sway of renaissance?

While this article won’t analyze the psychological ambitions of right-brained elites and their innate desire to recreate, it will attempt to describe the difference between redesigning and realigning, as well the advantages of one over the other.

If iLife Falls in the Forest…#section2

In January 2005, Apple’s iLife ’05 was announced from Macworld Expo in San Francisco. The ensuing conversation offered plenty of feature-laden jargon regarding the upgraded suite of “digital lifestyle applications.”

Virtually absent from the discussion was any mention of the rebranded iLife packaging. With little fanfare, Apple introduced a refreshed identity—let’s call it a “redesign” for now—for its suite of lifestyle tools, and an unexpected hush seemed to fall over the crowds that might have otherwise discussed the shift in packaging design. 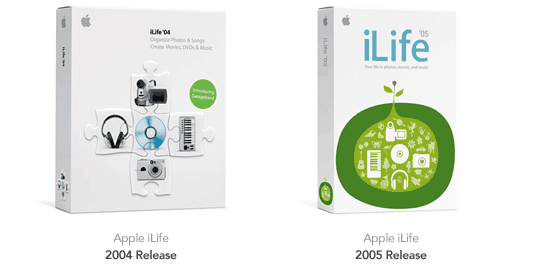 It was almost immediately following the release of iLife ’05 that the idea for this article was spawned. Something clicked. The new iLife packaging wasn’t just a redesign for the sake of redesigning. It seemed to represent much more than that. Personal computing was no longer something done to accomplish something else more efficiently, but rather a part of everyday life, even critical to communication and social interaction. The iPod, for example, was no longer only for the technorati; it was quickly becoming mainstream for coder and soccer mom alike. And that’s what the new packaging seemed to portray—less about technology, more about people. The camera, keyboard, and similar objects subtly remain from the previous packaging, but the organic styling and seed metaphor—a perfect representation of “life” itself—steal the show.

So was the new iLife packaging merely another redesign to satisfy creative hunger pangs, or was it an attempt at something greater? Perhaps it wasn’t even a redesign after all, but rather a shift in positioning—a realign instead of a redesign.

By now it’s apparent that I’ve split us, the creatives, into two camps—and equally apparent that I prefer to wear Realigner team colors. Allow me to indulge in team bias by comparing the two.

The Redesigners often rely on emotional responses to aesthetics in justifying a redesign. You’ll typically hear statements like these:

Too often, look and feel, color scheme, layout, and identity are presented as solutions to problems discussed in these conversations long before regard is given to other less-aesthetic issues that may very well be the root of the problem. The old warning against treating symptom rather than cause comes to mind.

In direct contrast to the Redesigners, the Realigners cite strategic objectives and user needs as reasons to consider a site overhaul:

Thus, the differences between Redesigners and Realigners might be summarized as follows: The desire to redesign is aesthetic-driven, while the desire to realign is purpose-driven. One approach seeks merely to refresh, the other aims to fully reposition and may or may not include a full refresh. (Note that by “reposition,” I mean strategy and not physical location or dimensions.)

Don’t get me wrong—I too have played the role of typical Redesigner at times. We’re all entitled to throw caution to the wind and redesign as a means of staying on top of one’s game (e.g. redesign contests and portfolio sites). And besides, we can’t bear the full brunt of the blame—we’re creatives first, strategists (and info architects and project managers and coders and everything else under the sun) second. But I worry persistent redesigning with little cause often serves to promote only proprietary creativity, doing much to educate one in the hows of redesigning but little in the whys of realigning.

Perhaps the best way to educate one’s self in the whys of realigning is to start by saying no. Strategy is often just as much about saying no as it is about saying yes. So is realigning.

Considered by many as the godfather of strategy, Michael Porter says it best in his Harvard Business Review article, “What is Strategy?” (emphasis mine):

Thank you, Godfather Michael. You’ve given us reason to question redesigning and begin thinking about realigning, simply by first saying no to the typical whims of gratuitous refresh and renew.

But enough about strategy and other conceptual banter. Let’s talk practical application.

Proof Is In the Pixels#section7

Though we’ve never met in person, I consider Jesse Bennett-Chamberlain one of my closest friends. While authoring initial ideas for this article, I was given a peek at the upcoming redesign—er, realign—of Jesse’s studio site, 31Three.

Jesse had no idea I was penning thoughts on this subject, yet the instant I saw his nascent layout in raw format I knew I had my first case study. After literally years of begging him to do so, Jesse was finally heeding the call to jump from tables to standards, as well as adding a blog to the site. Accordingly, the site needed to be updated, yet an all-out redesign wasn’t necessary. He already had a solid design, so following a few minor color, grid, and typography changes he was well on his way to becoming a Realigner. 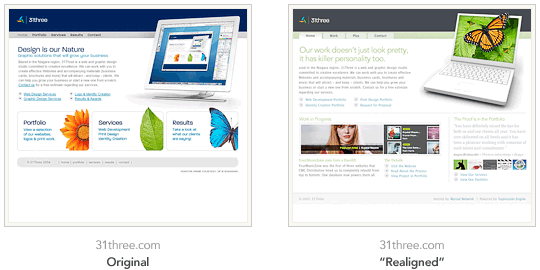 Like most other sites of age, Dan Cederholm’s SimpleBits has changed over the years. But not as one might expect. Take a look at the sequence of screen grabs below:

Notice any sweeping changes from year to year? Neither did I. Dan has managed to tune, tweak, and adapt his site in response to growth and changes in positioning, while maintaining a skeleton that bears similarities with each passing phase.  As I’ve watched Dan launch new versions over the years, he’s done so with an eye toward purpose-driven improvements. Chalk up another one for the Realigners.

“But Cameron,” you interject, “these are a pair of small studio sites you’re spoon-feeding us. What about realigning on a larger scale?”

Not so fast, honey. Keep reading.

Over the summer, I had the pleasure of doing contract work for March of Dimes. Founded by Franklin D. Roosevelt in 1938, March of Dimes seeks to reduce premature births through research and fundraiser events such as WalkAmerica. Following a generous referral from Nick Finck, they came to me in need of a new homepage.

As typical with other projects, I was provided an RFP before being selected for the project. Here’s the opening statement from that RFP:

Bingo. They nailed it. That’s the thinking of a Realigner—purpose-driven retooling. There’s virtually no mention of aesthetics, but plenty of talk about responding to growth and new opportunities.

And so began the realignment of the March of Dimes homepage. In fact, we were to realign only the homepage; all other pages would remain intact. The homepage, therefore, would not only need to address the issues mentioned in the RFP, but it would also need to integrate aesthetically with the rest of the site. This fact alone silenced any desire for a full makeover. 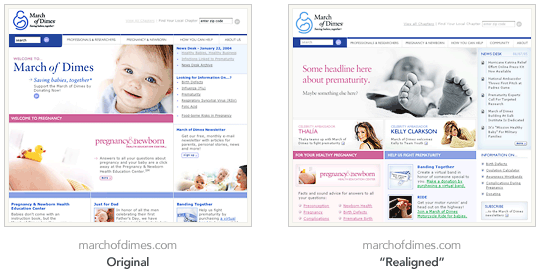 It’s probably no surprise, then, that the realigned homepage (shown at right above) will not be entirely different from the existing homepage. The new homepage is scheduled to be released in the coming weeks and is still under final review at time of publication (note the filler headline, for example).

By now I hope I’ve recruited you to join me on the Realigner sidelines. However, be aware that I don’t shun the full refresh in all its aesthetical glory when necessary. It’s perfectly fine to refresh the entire design from the ground up if there’s good reason to do so, and especially if it’s the cause and not merely the symptom of your site’s woes.

In fact, this very site (A List Apart) underwent a similar transformation only weeks ago, based on a need to adapt to the new identity, brand extensions (A Book Apart, An Event Apart), and other necessary improvements. So by all means, bring on the full refresh should it be warranted.

Ready to embrace the paradigm shift from redesign to realign? Consider the following when making the leap of faith to Realignism:

Go get ’em, kids. As Mom used to say, “make something of yourself.” Team Realigner is a great place to start.

Every product has a personality—but is yours deliberately designed? Meg Dickey-Kurdziolek shows you how Weather Underground solved its personality problems by creating a design persona, and teaches you collaborative methods for starting a personality adjustment in your company.

Living up to Your (Business) Ideals

We all want to do work that matches our values—that lets us live up to our ideals for the world. But we also want to keep the lights on, make payroll, and maybe even grow. How can we design our agencies, studios, or freelance businesses to do both? Geoff DiMasi says the answer is in establishing a vision for your work, and directly tying that vision to the way you evaluate prospective clients and projects—and he’s here to help you get started.
Get our latest articles in your inbox. Sign up for email alerts.

If, like many folks during the pandemic, you’ve begun confusing burnout for achievement, Donna Bungard will show you how to recognize that you’re low on fuel and give you a map of rest stops where you can refill your tank.
Emanuela Cozzi and Lennart Overkamp show us a new take on user personas that can prove to be more effective and meaningful.
Immersive experiences are so hot right now, but your content may not be quite ready. Recasting your fixed web content in more immersive ways will allow you to create exciting new experiences and prepare your site for an unpredictable future.
Publish global, think local. Discover how to use your website as a communication tool to gain new markets in different cultures. (Hint: Translating your content may not be enough.)
JavaScript gives us many ways to do things, but deciding which way can be tricky. Laurie Barth gives some insight into how to make these decisions for your team.