In the winter of 1969, Virginia Scofield faced a daunting challenge. It was a recurring challenge—more like a nightmare—and she had already failed miserably at her first attempt. This particular obstacle was one that most people consider themselves lucky to never face: undergraduate organic chemistry.

At the time, Virginia was a biological sciences student at the University of Texas. Her career plan bumper sticker could have read “Ph.D. or Death!” as there was no alternate route to pursuing her doctorate. She had to learn, integrate, and retain organic chemistry’s masochistic detail, and time was not on her side.

Having exhausted traditional learning methods such as highlighting, note-taking, and rote memorization, Virginia chose to unleash a powerful, primitive tool that ultimately turned out to be her savior: The Doodle. Virginia decided to draw rudimentary visual representations of every concept in her Morrison and Boyd textbook. She deployed a problem-solving technique that defied conventional wisdom and all the academic advice she had received. And the story has a happy ending. Not only did Virginia ace her organic chemistry final and eventually become Dr. Scofield, she also became a celebrated immunologist, earning accolades for one of the biggest scientific breakthroughs related to HIV transmission. She credits much of her success, then and now, to her world-turning decision to doodle.

So what exactly does it mean “to doodle?” If you reference any standard dictionary, it will offer up a variety of disreputable definitions: To dilly-dally, to fiddle around, to make meaningless marks, or to do something of little value, substance, or import. But considering what doodling did for Dr. Scofield and what it does for hordes of humans around the world, these definitions are nothing short of obnoxious. People have been solving problems and making sense of the world using simple visual language for over 30,000 years. A more appropriate definition is long overdue.

Doodling may be better described as ‘markings to help a person think.’ Most people believe that doodling requires the intellectual mind to shutdown, but this is one misrepresentation that needs correcting. There is no such thing as a mindless doodle. The act of doodling is the mind’s attempt to engage before succumbing to mindlessness. Doodling serves a myriad of functions that result in thinking, albeit in disguise. This universal act is known to:

That last benefit of the doodle is no slouch. Learning experts assert that, for information to be truly integrated, it must incorporate at least two of the major learning modalities or it must incorporate one modality coupled with a strong emotional experience. For the doodle to offer up the possibility of all three modalities and an emotional experience is an impressive feat for such an outwardly simple behavior. Lo and behold, this “useless act” is really a highly functional technique with broad applications for the way we work and the way we think. It’s no happy accident that Thomas Edison was a prolific doodler and also one of our most applauded inventors. Neither is it a coincidence that many of the most innovative companies use doodling and visual language to stay ahead of the curve.

Overturning decades of semantic disgrace won’t happen overnight, hence my term the strategic doodle. To doodle strategically is to doodle to track auditory or text-based information and display it back to an audience (it can be an audience of one). Strategic doodling is where powerhouse learning and problem solving take place, which is why it’s beyond justifiable at school and at work.

The doodle is the perfect office device: It’s user-friendly, it costs next to nothing to adopt and it’s accessible to all of us—not just the artistically inclined. What’s more, the doodle is the friendliest stepping-stone imaginable to mapping out serious process and design challenges. To apply doodle power at work, we first need to give ourselves permission to doodle. Next, we need a 101 skill set with which to begin.

The use of a hand-drawn visual language starts with an alphabet. Namely, a visual alphabet. As complex as we perceive the world to be, when reverse-engineered, there are only twelve forms that make up our visual landscape. You can doodle every one. The forms below are the fundamental building blocks for drawing everything in the known universe. Get comfortable with these forms individually and in recombination with each other to make shapes, and you’ve already moved through the doodle doorway. Every shape you need to draw a persona, a wireframe, or a logo is before your eyes. 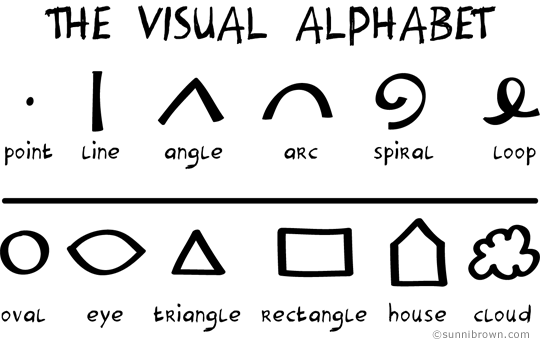 Fig. 1: The 12 elements of the visual alphabet. ©sunnibrown.com

Strategic doodling at its best involves the intentional construction of meaningful visual displays. This means that the more we can make information contextual, the better our display will be. When we doodle to show relationships between bits of information, to reveal a bigger picture of a system, or to decipher the efficiency of a workflow, we are embedding layers of meaning into what may otherwise be a more superficial use of the visual alphabet. Six basic elements help you add information richness to your display.

Make no mistake; a strategic doodle includes text. Our minds process letters as discrete images, so text is right at home in a doodle. But the idea is to selectively showcase the most relevant words and use them to complement the subject you’re communicating, not to write a novel on your page. President Kennedy often engaged in what could be called “word doodling,” in that he repeatedly traced over the same letters as he mulled over a problem. This multi-modal process helped him think and make decisions. So text emphasis and “word pictures” (below) are effective ways to show others what you mean and to sear information into your brain while you doodle. 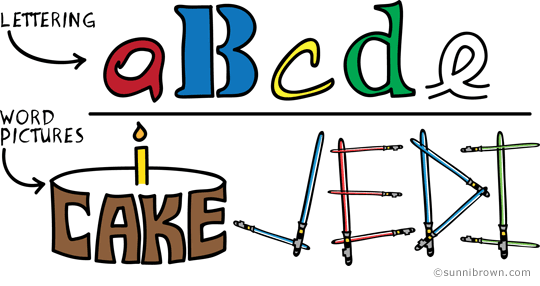 Because the strategic doodle allows for text, bullets come in handy as markers to distinguish one text-based concept from the next. Just like the pin drop on an iPhone map, bullets serve as landmarks to tell us that something important is in a particular space. Bullets are versatile, too. They can take almost any shape—circles, squares, stars, checkmarks, and an endless range of icons. The shape and color of bullets can also be used to elevate them in importance for the viewer. A red exclamation mark, for example, will likely attract more attention than a yellow sun.

Just like what we see in flow charts, frames create small fields to separate content from its neighbors, to indicate that there’s a discrete bit of information. And like connectors, frames can be designed to indicate the nature of the content they’re related to. They can look like standard boxes to suggest “normalcy,” or like a flowing line to suggest fluidity, or like comic book-style explosions to indicate something thrilling.

Connectors show the relationships between bits of information. All knowledge is in association with other knowledge, so connectors allow us to link systems and the components of those systems. Connectors can also indicate the type of connectedness between two or more elements—hierarchical or parallel—and the nature of that connectedness—whether it’s static or dynamic, weak or strong, uni- or multi-dimensional, etc. 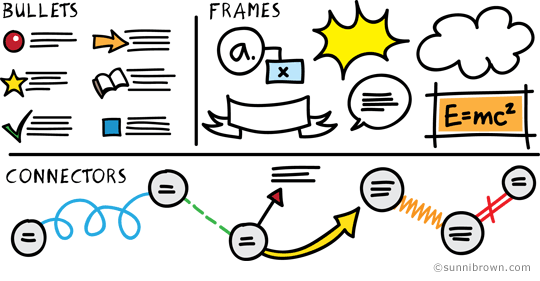 People are integral to systems and processes so it’s worthwhile to know how to doodle faces and stick figures. And don’t worry if you think they look ridiculous; our perceptual system is very forgiving of imperfections in visual representations. (It’s our judgment that’s not.) When gazing at something, we often want it to resemble a person so we can relate to it. More importantly, because the goal of the strategic doodle is to build a meaningful visual landscape, there’s no way to avoid the need to incorporate simple faces and figures. (Besides, how else are you going to tease your coworkers?) 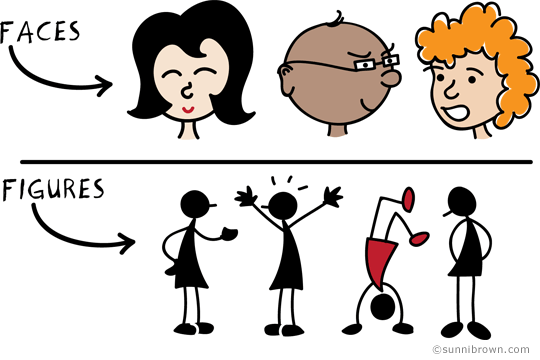 Fig. 4: Doodling faces and figures helps to create a meaningful visual landscape and lets you tease your coworkers. ©sunnibrown.com

For beginner doodlers, shadows and shading aren’t essential, but it is one of the most effective ways to make your images look more realistic and interesting to the viewer. Merriam-Webster defines shading as “the use of marking made within outlines to suggest three-dimensionality, shadow, or degrees of light and dark in a picture or drawing.” Shadows differ from shading in that they are defined as “the dark figure cast upon a surface by a body intercepting the rays from a source of light.” In other words, shading is on the object and shadows are not. The images below offer a small sample of the many ways you can use shadows and shading to create three-dimensionality and volume in your objects and people. It’s often all you need to make your doodles pop.

Because strategic doodling is about comprehension and communication rather than “art,” advancing beyond the basix doesn’t need to be a goal. Being able to effectively use text, bullets, frames, connectors, and so forth can make you a solid problem solver. And this may come as a surprise, but it’s important to note in today’s interconnected workplaces: one need not doodle alone.

Applications for a group doodle#section12

We usually think of doodling as a solitary activity, but group doodles exploit the power of participatory design and co-creation, and there are a slew of ways you can doodle with your co-workers to share insights and solve real problems. Below are just a few suggestions.

Like infants and dynamite, the doodle is deceptively simple. A staggering number of scientific, mathematical, and business breakthroughs have come via the act of making inelegant marks on paper. The beauty of the doodle is that it requires no educational degrees, no financial status, no training. It only asks that we unleash it and let it do what it does best: help us think.

Companies often tout their "culture" as a reason to you should consider working there, but often what they pass off as culture amounts to little more than a foosball table and free snacks. In this excerpt from Creative Culture, Justin Dauer draws direct connections between an organizations’ true culture and the design work that it does.

Jobs To Be Done

Ever find solutions before you find the problems? In this excerpt from The Jobs To Be Done Playbook, Jim Kalbach gives some advice on aligning innovation to customer needs, including creating a jobs-driven roadmap and using job stories to solve specific design problems.
Get our latest articles in your inbox. Sign up for email alerts.