People use websites to make decisions—from what product to buy to what health treatment to seek. [1][2][3] When someone consults a website, there is a precious opportunity not only to provide useful information but also to influence their decision. To make the most of this opportune moment, web professionals need to understand the rhetorical concept of kairos.

Greek rhetoricians defined kairos as saying or doing the right thing at the right time.  Clues to understanding kairos lie in its dual etymological roots: Weaving and archery. [4] In weaving, kairos occurs in the instant at which the shuttle passes through an opening in the loom’s threads; this is the moment when all the threads come together to create the fabric. Similarly, on the web, the threads of technology, design, content, culture, and user science intertwine to form the fabric—or context—that swathes the opportune moment.

But what seizes the moment? That’s where the other etymological root of kairos, archery, sheds light. Something has to act like an arrow and—ZING!—hit the mark, with enough force to stick. For Greek rhetoricians, that something was spoken language. On the web, that something is written language.

As web professionals, we craft a context for the opportune moment. But we then need to aim at that context with words that zing. To do that, I believe we have much to learn from kairos.

At Stanford University, B.J. Fogg studies the intersection of influence and technology. Dubbed “captology,” or the study of computers as persuasive technology, Fogg’s research shows how people are influenced by their relationship with technology. [5] In a modern notion of kairos, he observes the value of getting information to people at the right time.

Similarly, Andrea Lunsford explores writing, technology, and literacy. [6] Lunsford’s recent work analyzed student writing in a range of contexts—from chat sessions to academic papers. She found that students’ use of technology does not damage their writing abilities but, in fact, improves their awareness of kairos.

As Lunsford’s study suggests, social media, such as blogging and microblogging, turns users into writers who can respond to kairos quickly. For example, social media allows companies to respond to an angry or confused customer. Importantly, what social media users write is published publicly for anyone to see, a situation that requires writing quickly yet carefully. [7] Users of social media, therefore, need to know the basics of writing for the opportune moment. At the same time, kairos renews the value of professional web writing. Influential words for planned opportune moments, such as a landing page, are more critical than ever.

Now that we have defined kairos and asserted the importance of writing for it, let’s explore it further with examples.

Examples of words for kairos”¨#section4

To select the right words, take cues from rhetoric and psychology. I do not mean use unctuous sales language or manipulative mind control, nor do I necessarily mean use catchy words. I simply mean add influential weight to web writing based on centuries of rhetorical wisdom and a growing body of scientific knowledge. To illustrate, I offer examples in three different contexts.

A service is not physical like a product. People cannot see it or touch it. To boot, a service usually requires or encourages an obligation for a time period, which can cause people to hesitate. What words help sell a service?

Use words that make the service tangible. Explain how the service works with vivid words. This helps people see it in their lives. Besides being clear, this approach helps avoid a cognitive bias based on the availability heuristic, the tendency to judge probability or frequency based on how easily an example comes to mind. [8] If people can’t effortlessly imagine when they would use the service, they will think they don’t need it. Netflix makes its service easy to envision with small images and the prominent words “Rent, Receive, Watch, Exchange.” Zing.

Fig. 1: Netflix appeals to customers through the use of images and prominent words about their service.

Use words that tap into unifying values. “¨If a service will be someone’s companion for a while, it better match his or her ideals. Take Grasshopper, the voicemail service for entrepreneurs, as an example. When labeling the voicemail plans, Grasshopper could have gone with the de facto “Basic, Premium, Plus” or “Bronze, Silver, Gold.” Instead, someone pondered the values of their entrepreneurial customers and selected “Start, Grow, Max.” Across industry, location, and demographic, what entrepreneur doesn’t fervently aspire to grow? Zing.

Fig. 2: Grasshopper uses a dose of creative copy to describe their service plans.

Customer service is a growing use for social media. A customer complaining through social media not only wants a problem solved but also is deciding whether to remain loyal. To further complicate the situation, customers criticize companies both about problems with their own experience and about complex problems they perceive with the company or its industry.

Use words that concede. Reciprocity is the social norm of treating others the way they treat you—especially repaying someone when he or she gives you something. [9] Frank uses this approach to address a complex criticism of the cable and communications industry, as shown in this exchange sparked by Graham Hill about net neutrality. 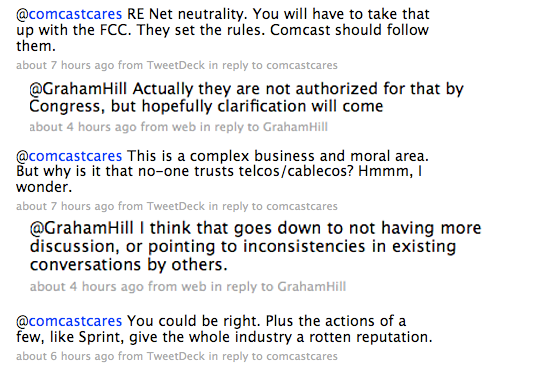 Notice that Frank is not giving an obsequious “I’m sorry” or an insincere “You’re right.” He listens to the customer’s viewpoint, concedes to some aspects of it, and offers more information to refine the viewpoint. In the process, the customer gives him, and Comcast, some slack. Zing.

Some health problems are annoying. Some are scary. Still others are embarrassing. Sexually transmitted diseases (STDs) can be all three. Entangled in a web of social and moral issues, STDs are not part of most dinner conversations. That makes the web a haven where people at high risk of STDs, sexually active teenagers, can obtain credible information anonymously and quickly.

One important choice these teenagers face is whether to be tested. The stakes in this choice for the teenagers and for society are high. If adolescents with an STD fail to seek testing and early treatment, they may spread the disease to others and suffer complications ranging from infertility to death. So, in this situation, what words help teenagers decide? 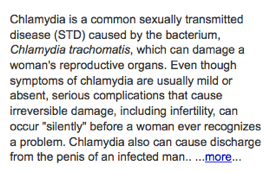 Use words that strike the right tone. Words that read like an angry parent wagging his or her finger will not fly. The CDC website, high on search rankings for any STD-related term, states the facts without passing judgment. See this example for chlamydia, a popular fact sheet.”¨

While this neutral tone likely will not drive teens away, will it prompt them to act? Compare it to another example, GYT (Get Yourself Tested) on It’s YOUR (Sex) Life, a campaign sponsored by MTV and the Kaiser Family Foundation. Mobile and web slang is a centerpiece of the campaign. I wondered with Tracy Clark-Flory of Salon.com whether using this vernacular is trying too hard, like a middle-aged mom who wears her teen daughter’s clothes. For example, read this text from the main GYT page. 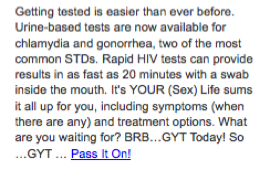 Fig. 5: Use words that frame the option to act to help readers relate to your content.

The tone makes my eyes roll, but I am not the target audience. The question is does the tone resonate with teens? Based on the compelling results of this campaign so far, the answer appears to be yes. Zing.”¨

Use words that frame the option to act. Framing is a psychological and rhetorical heuristic of how people respond to information. Simply put, people react differently to the same choice stated differently. When a best choice exists, framing can make it clear. Framing also overcomes the weaknesses of human judgment. One weakness, optimism and overconfidence, is magnified during teen years. [10] This weakness shows in very risky choices such as driving extremely fast or while under the influence. You might recognize this phenomenon as the “I’m invincible” syndrome.”¨Let’s see how words on the web frame the option to get tested for STDs. The CDC website hints at action in its explanation of diagnosing an STD, as shown in this example for chlamydia.

Fig. 6: The CDC hints at a call to action in their description of an STD.

If the disease is diagnosed with a test, then the implication is the teenager should get tested. I venture that this approach is too subtle for our situation.

The Mayo Clinic succinctly explains the option to get tested and why. However, as a resource for a general audience, it does not directly address a teen’s indomitable state-of-mind.

Fig. 7: The Mayo Clinic uses straight-forward reasons to get tested which addresses a wide audience.

In contrast, GYT bluntly states that young adults are far from immune to STDs, so they need testing. And what rebellious teen doesn’t aspire to take control of life rather than obey an order? Zing.”¨

These examples are only a small sample. People make innumerable decisions using websites. Our websites, then, offer countless possibilities to influence. We can turn these possibilities into realities by understanding and writing for kairos—but we often do not.

To push for quick word choices by playing down their consequences, I’ve watched more than one web professional shrug and say “We’re not saving lives here.” Sometimes, I even nodded in agreement. Not anymore. Our websites could help people help themselves—and the people around them—by guiding them into good decisions. In that respect, our websites could save lives.

When I think about that potential, I’m convinced that we have more than an opportunity to say the right words at the right time. We have a responsibility to do so. Let’s embrace the responsibility, not shirk it, by investing in words that zing.

Those immersive experiences are so hot right now, as new tools and frameworks help our designs and code transcend the web. But fresh tech doesn’t mean our content is ready for extended and mixed-reality prime time. Preston So shows us how to recast our fixed web content in more immersive ways—to create exciting new experiences and prepare our sites for an unpredictable future.

Your website reaches the whole world. Which makes the whole world, potentially, your marketplace. But translating your content into other languages may not be enough. Putri Hapsari explains how to effectively use your site to gain new markets in different cultures.
Get our latest articles in your inbox. Sign up for email alerts.