We are pleased to present a shortened and edited excerpt from the second edition of Information Architecture: Blueprints for the Web. – Ed.

Published in 1977, Christopher Alexander’s A Pattern Language: Towns, Buildings, Construction, contains the collective wisdom of world cultures on centuries of building human housing. It had a resounding effect not only on architecture and urban planning, but also on software design. In it, Alexander and his co-authors explored 253 architectural design patterns. For example:

Every pattern explores ways of designing space to meet human needs and promote happiness. It doesn’t take great imagination to apply these architectural principles to information architecture—taking them out of the real world and into the digital world.

Humans can behave in surprising ways when you bring them together. In an information space, a human’s needs are simple and his behavior straightforward. Find. Read. Save. But once you get a bunch of humans together, communicating and collaborating, you can observe both the madness and the wisdom of crowds. Digg, an online news service in which the top stories are selected by reader votes, is as likely to select an insightful political commentary as it is an illegal crack for a piece of software as their top story. This unpredictability makes architecting social spaces the most challenging work a designer can take on.

While your designs can never control people, they can encourage good behavior and discourage bad behavior. The psychologist Kurt Lewin developed an equation that explains why people do the crazy things they do. Lewin asserts that behavior is a function of a person and his environment: B=f(P,E). You can’t change a person’s nature, but you can design the environment he moves around in. Let’s explore some of Alexander’s patterns I’ve observed in my work and the design work of my fellow practitioners.

Conflict: Who can you trust online?

Resolution: Give each user an identity, and then allow him to customize it as he sees fit. The identity allows the user to express his personality, and is typically accessed and protected via a unique log-in. Participation is rewarded by enhanced reputation and the ability to collect items in the system (bookmarks, history, relationships, and so on).

Identity is the bedrock of social architecture. In the brilliant essay “A Group Is Its Own Worst Enemy,”  Clay Shirky writes:

To allow your user to successfully create an identity, you need to provide ways for users to reveal themselves online.  Four elements of online identity are:

A profile is a collection of information about the user, typically including a short biography and contextually appropriate facts. Orkut, Google’s foray into social networks, collects and displays gender and marital state prominently. LinkedIn, a business networking site, doesn’t touch any of these bits of information, focusing instead on job history, skill set, and education. 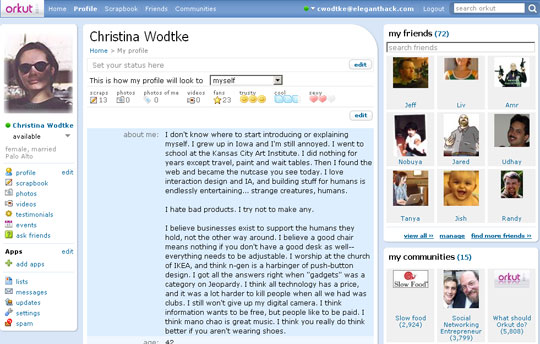 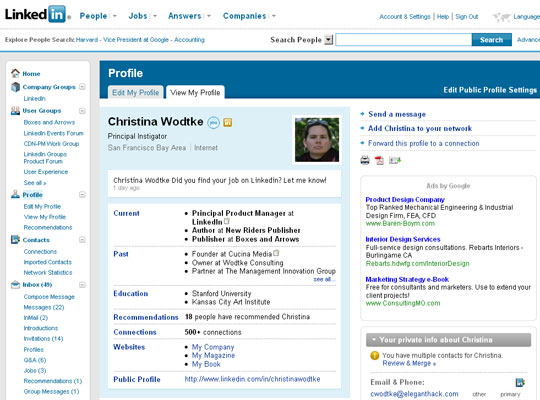 One thing any inviting and vibrant community needs is a sense of life. Presence is a way for a user to express themself and populate the online space. Presence can be a status,  history of activity, or location.

On a website, your reputation is equal to the sum of all your past actions on the site, good or bad, where the community defines “good” and “bad.” Since human memory is fallible, and of course, new members or visitors don’t always know the history, reputation systems are built into web software to track behavior and how the community judges it. Amazon’s “Top 500 Reviewer” or eBay’s “Top Seller” designations are great examples of reputation systems.

Conflict: On a web site with thousands or millions of people, how do you make sure you can keep track of the people you care about?

Resolution: Create ways for people to identify, connect, and organize the people they care about, as well as the information those people produce. The complexity of relationship classification depends on how your customers will use your web site.

Relationships are always present in communities. Online, site software manifests and categorizes relationships according to the community’s needs. It can be simple, such as Twitter’s flat following mode. Twitter is based on the concept that people broadcast to others and subscribe to others’ broadcasts as they would to a magazine. The Twitter system design doesn’t recognize that mutual following might be a proxy for friendship. The entirety of the relationship is, “I’m interested.” 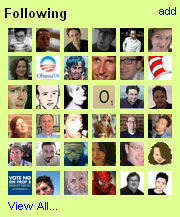 Offering more choices to define the nature of relationships allows the user greater control, but introduces complexity. Flickr offers categories for “friends,” “family,” and “contacts,” which the user applies as they see fit—including marking as friends people who are really family and as family those who are really friends.

When your Flickr contacts grow to 100, “friends” becomes a useful tool to watch some people a little more closely, because your friends appear in the center of your homepage. Additionally, you set viewing permissions based on these distinctions. For example, a college student might show his most intimate photos only to a list of close friends labeled family. He may label actual family members as friends or contacts. Each label has a built-in set of assumptions that may or may not apply to the user’s needs. But having clarity on who sees what, no matter their label, is useful. 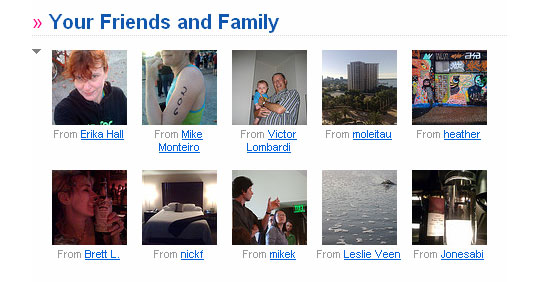 Give your users a way to classify the humans in their life. It can be as simple as just saying, “I know him,” or “I don’t know him,” or as complex as saying, “We were college roommates, but we haven’t spoken in ten years.”

Groups are another relationship structure, based on shared interests or experiences rather than personal connection. They include alumni groups, work groups, and professional organizations.

While walking into a biker bar wearing a Yamaha tee shirt might get you killed, wandering into a Star Wars forum and saying, “George Lucas ripped off Joseph Campbell, and he didn’t even do it well!” will generate 500 flames an hour. We call those who violate norms “trolls,” and it’s best to prepare for them. Create rules for behavior and consequences for violating the rules such as a time-out or a ban.

Conflict: If there’s nothing to do on a site, then it doesn’t matter if all your friends are there or not. The site has no more interest than an address book, and it won’t get affection or traffic.

Resolution: Create activities that are useful to individuals but are much improved by group participation.

The third major pattern in social software is community activity. This is just like being a party planner: you’ve brought people together, now what? Happily, humans have things they like to do together, and if you get them in the same spot and give them even rudimentary tools, they’ll start talking, sharing, and collaborating. 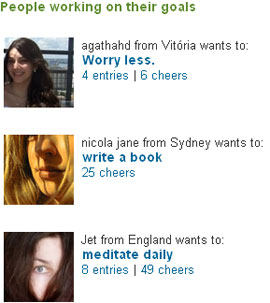 The more things your users can do on your site, the more time and energy they’ll spend there. Some elements of activity are:

Gift giving is a primitive human behavior—it binds us. When one person gives something to another, there’s gratitude, and a desire to reciprocate. In online community settings, where the nature of the medium ensures you retain a copy of any files you give to someone else, gift giving becomes sharing. Sharing gathers people of like interests, and allows for an exchange of ideas. As the community tightens, sharing permits exchanging dreams, hopes, secrets, and fears.

Conversations and communication—that’s the heart and soul of a community. No matter how much software we build, people build the relationships, and they build them out of words first. If you don’t have a place for people to put their words, community devolves into viewership.

Social software was envisioned as a tool to allow work groups to collaborate. While the “social” part may have swept the web, there are still plenty of tools that focus on allowing smaller groups to get things done.

Humans are complex, and the web is dynamic. Many more innovations and patterns of excellence will be defined. Yet human contact and interaction is not new. From A Pattern Language:

This pattern decribes the design of a town, but can be applied to social network design. Facebook was initially lambasted over what has become its most popular feature: the news feed. The news feed is the equivalent of the town square where you can see what’s going on with everybody and chat about it. Some people want to live on the town square, so they don’t miss a thing. Others like to live at the edges of town, away from prying eyes and overwhelming updates. Social architecture’s ongoing challenge is to find intelligent and subtle ways of allowing people to choose degrees of publicness (including shelter from other people’s publicness).

If we remember the social in social architecture, we can continue to make new products that delight people as well as change their lives.

Even at the most welcoming and trusting of conferences, a code of conduct is a necessity. Codes of conduct let people know that organizers are willing to protect participants and solve problems—a way of improving the user experience for our whole community. Here, Christina Wodtke attests to the inclusive power of codes of conduct—and what we need to do to see them adopted across the industry.

Design decisions across our projects can mean the difference between affirmation and invalidation—and sometimes safety and danger. Erin White explores the repercussions for trans, non-binary, and gender-variant users and what we can do about it.

To rebuild a system, we must understand it. Enter the structural audit: a review of the site focused solely on its menus, links, flows, and hierarchies. Lisa Maria Martin explains in this excerpt from her new A Book Apart book, Everyday Information Architecture.
Get our latest articles in your inbox. Sign up for email alerts.

In this excerpt from Voice Content and Usability, author Preston So talks about the messy, primordial nature of human speech and challenges with programming computers to deal with these complexities.
As devices continue to diversify in dizzying ways, how can we make sure our work on the web stays as relevant as ever for the long haul? Cathy Dutton shares how practitioners must perfect designs both for the paradigms of the present and the twists of the future, come what may.
Receiving feedback can be a stressful experience: will an open-ended question attract helpful guidance or harsh criticism? Erin “Folletto“ Casali coaches us through a process to ensure that feedback always lands gracefully.
You’ve heard the term “constructive criticism” countless times but do you know how to deliver it? Part one of this series from Erin ‘Folletto’ Casali gives you a framework for it! Flex your feedback muscles and practice these skills to empower and inspire others without deflating or confusing them.
If, like many folks during the pandemic, you’ve begun confusing burnout for achievement, Donna Bungard will show you how to recognize that you’re low on fuel and give you a map of rest stops where you can refill your tank.