Zebra striping—also known as candy striping or half-shadow—is the application of faint shading to alternate lines or rows in data tables or forms. Examples of websites that use zebra striping include the currency site XE, the CIA World Factbook, and Monster.com. Zebra striping on the web is actually a carryover from print days: one of the first mentions of the technique appeared in 1961 [1].

Many believe that zebra stripes aid the reader by guiding the eye along the row. However, despite being in use in both paper and electronic mediums for almost half a century, there is practically no evidence that it actually assists users in this way. In June and July 2007, I conducted an extensive review of sources such as the International Association of Paper Historians, the Business and Forms Management Association, and the IEEE Annals of the History of Computing, but found absolutely no information on the origins of or rationale behind zebra striping.

Yet applying zebra striping in an electronic medium is a nontrivial task. A List Apart is just one publisher of an article about how to do zebra striping. As web designers, we certainly cannot afford to be spending time coding an approach that isn’t actually helpful! So, I decided to conduct a study to see whether zebra striping really does make things easier.

Zebra striping is used when data is presented in an essentially tabular form. The user of that table will be looking for one or more data points. Their aim is to get the right points and get them as quickly as possible. Therefore, if we set a task that uses a table, and zebra striping does make things easier, then we would expect to see improvements in two things: accuracy and speed.

Participants were randomly assigned to which format they received first, striped or plain, to remove any order effects. The experiment was described only as “a study of table formatting.” The experiment was conducted via the internet, which, while having its problems, was efficient and cost effective. Two weeks of experimentation yielded usable data from 244 people.

The data table, shown below, had 15 rows (including a heading row) and nine columns. It contained artificial data, which was loosely based on common descriptors for screws. As an example, one of the questions was “is the screw with minor diameter tolerance of 6g available at the factory outlet?” 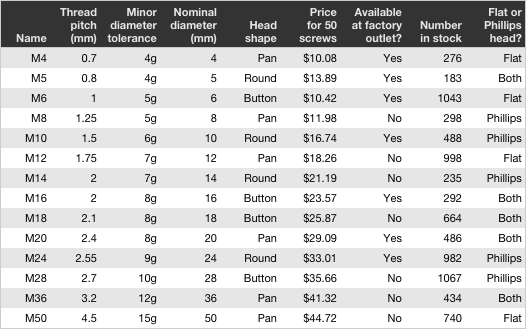 Zebra striped data table, with 15 rows (including a heading row) and nine columns.

The aim was to construct a table that:

Other than the presence or absence of zebra striping, there were no changes made to the table during the experiment.

Note: There’s lots of statistics behind these results that I won’t bore you with, but you can download the full-length, peer-reviewed paper (PDF, 320K).

Even though I tried to make the task a little difficult, participants got most of the answers right—the error rate on all questions was 12% or less.

Questions that had particularly low errors rates—e.g., question one with an error rate of 2%—were excluded from the remainder of the analysis, because the findings they yielded would be unreliable. This left one pair of parallel questions: question three and question six. As the graph below shows, there was essentially no difference in accuracy between the striped-table and plain-table versions of these questions.

Graph indicating difference in accuracy between the striped and plain table versions of the questions.

Further analysis of these data showed that indeed there were no statistically significant difference in accuracy between striped answers and plain answers.

As the chart below shows, the average observed time taken to answer questions one and two was greater when the table was zebra striped, but for the remaining four questions, the time taken was less when the table was zebra striped (see Table 5 in the peer-reviewed paper). However, only the difference in time taken for question six was statistically significant, meaning we can’t be sure that the other differences weren’t down to the particular sample we ended up with.

Graph indicating difference in time taken to answer questions between the striped and plain table versions.

At the end of the six questions that referred to the data table, participants were asked for their personal preference with regard to zebra striping.

Overall, the greatest proportion of participants preferred zebra striping (46%), but a significant portion had no preference at all (33%).

So there’s no point in zebra striping?#section8

This experiment yielded no evidence that zebra striping consistently improves the accuracy or speed of tasks. This would seem to suggest that we shouldn’t bother with zebra striping anymore.

However, there are a few arguments against tossing zebra striping out altogether.

Firstly, in this study there was a subjective preference for striped tables over plain. My reading and discussions with others suggest a number of people find zebra-striped tables more aesthetically pleasing. If many users like zebra striping (and another large group aren’t fussed either way), then why not apply it?

Secondly, this was just one experiment, with one dataset. It is possible that the particular design of this experiment meant that zebra striping had little effect. In other cases, particularly when there is considerable space between columns and/or the user is required to scroll horizontally, a more pronounced effect may have been observed.

Finally, and perhaps most interestingly, a number of participants in the study spontaneously reported using their finger, on or over the computer screen, to follow down columns and across rows. Other participants used their mouse to highlight rows of interest. These people were, in effect, creating their own “temporary” zebra striping. So we may be reducing the burden on our users if we do the zebra striping for them.

Unfortunately, this study hasn’t given us a clear answer about whether or not to continue applying zebra stripes to tabular data. However, it didn’t give any indication that zebra striping makes things worse, and we do know that it is liked by a number of users, so it certainly doesn’t seem to cause much harm.

At the end of the day, the decision about whether to use zebra striping probably comes down to a subjective assessment of likely gains versus the cost of implementation.

Participate in the follow-up study#section10

Formulate is currently conducting a follow-up study to help address some of the questions that arose from the research described in this article. The study takes less than five minutes. Many participants are needed to achieve valid results.

To do the study, visit http://surveys.formulate.com.au/dtfu/. To learn more, read about the study.

Though some decry flat user interfaces as pure fashion, or as the obvious response to skeuomorphic trends, many designers have embraced the flat approach because the reduction in visual styling (such as gradients, drop shadows, and borders) creates interfaces that feel simpler and cleaner. Trouble is, most flat UIs are built with a focus on the provision of content, with transactional components (i.e., forms) receiving very little attention. So what happens when flat UIs and forms collide? User experiences can, and often do, suffer. Keep your flat forms from failing by using controlled redundancy to communicate difference.

Designing for the happy path—where users always enter ideal data and clients choose perfect images—can leave your layouts warped and broken when your users stray. Steven Garrity suggests you take a walk on the wild side and design with difficult data to become a better designer.

The Story of CSS Grid, from Its Creators

Designers have used grids for centuries. And after more than 20 years of waiting, they are finally here for the browser. This is the story of CSS Grid. It took a lot of people in the right place and at the right time to make it happen.
Get our latest articles in your inbox. Sign up for email alerts.

How to be human, build trust, and sustain relationships with our design and development clients and partners.
In this excerpt from World Wide Waste, Gerry McGovern examines the environmental impact of bloated websites and unnecessary assets.
In this excerpt from Creative Culture, Justin Dauer walks us through many ways in which an organizations’ culture and the design work that it does play off of one another.
Amy Bucher shares insights into using personalization to create meaningful user experiences.
Noah Glushien shares the ins and outs of creating a successful career in web, despite being color blind.