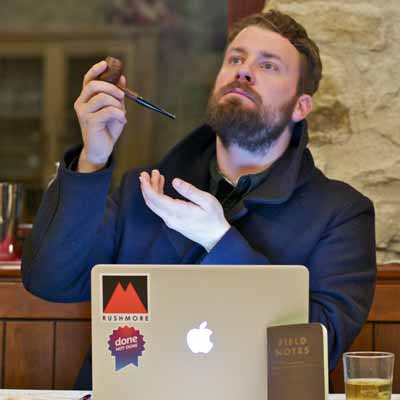 Hi, I’m Cameron. Welcome to my bio. My real name is Cameron Koczon but I go by Fictive Cameron on the Internet. I run a web company called Fictive Kin based in Brooklyn, NY. We are currently working furiously on an app called Gimme Bar which is, as they say, neato torpedo. I co-created a to do list application called TeuxDeux and I co-organized a web conference called Brooklyn Beta. I like co-doing things because it’s more fun to work on awesome things with awesome people. I sometimes post to my off-kilter blog. I smoke a pipe.

Design is on a roll. Client services are experiencing a major uptick in demand, seasoned design professionals are abandoning client work in favor of entrepreneurship, and designer-co-founded startups such as Kickstarter and Airbnb are taking center stage. It's becoming increasingly difficult to ignore the fact that design has a massive role to play in the evolution of the web and the next generation of web products. The result, says Cameron Koczon, is that designers have now been given a blank check, one that lets web designers band together as a community to change the way design is perceived; change the way products are built; and quite possibly change the world.
Bookmarklet apps like Instapaper and Readability point to a future where content is no longer stuck in websites, but floats in orbit around users. And we’re halfway there. Content shifting lets a user take content from one context (e.g. your website) to another (e.g. Instapaper). Before content can be shifted, it must be correctly identified, uprooted from its source, and tied to a user. But content shifting, as powerful as it is, is only the beginning. Discover what’s possible when content is liberated.